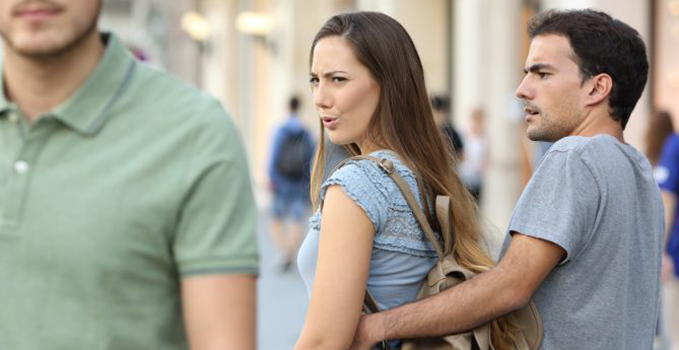 Female infidelity: a big taboo in the UK

78% of British women consider female affair worse than male, while among them 4 out of 5 have already experienced an illicit relationship.

When it’s about infidelity women are widely discriminated, especially by their fellow women. Yet, the number of extra-marital affairs shows they’re not much different from their counterparts when it’s about sexual pleasure.

The European Women’s Infidelity Observatory 2019, a study conducted by IFOP – Institute Français d’Opinion Publique (French Institute of Public Opinion) and commissioned by Gleeden – the first portal for extramarital encounters in Europe made by women with over 6 million members of which over 250,000 in the UK – found out that British women have a significantly more negative perception of female infidelity compared to that of males. Even though they seem to cross the line almost at the same pace as men.

The study, conducted on 5,000 women from 5 European countries – UK, France, Germany, Spain and Italy – provides precise and reliable data through which it is possible to trace a map of female infidelity in Europe and the UK, and to track common pattern and behaviours of women who decided to cheat on their partners.

Generally, 76% of European women believe that the taboo about female infidelity still exists, with 78% of Brits topping the chart with women considering female cheating more serious than male infidelity. Whatever the reason, she seems to be more criticised than he is, even when the couple is separated for months or if the woman was already betrayed by her partner in the past. This traditional idea is held more by women over their 40s.

In 2019 more British women are cheating, reaching 33% after France and Germany who are above the average. However, in all the countries analysed in this research the number of female extramarital affairs remains below that of men. More interestingly, the research showed also a significant contradiction between the women’s belief and their behaviour. In fact, data shows that, even though blaming female affair, 86% of females have had more than ten partners during their life, where 84% of them declared having experienced an extra-marital encounter. These are all happily married women and quite satisfied with their emotional relationship; however, data does not reveal the same result when analysing their sexual life. 84% confessed absolute sexual dissatisfaction caused by lack of intercourse (83%) and disinterest from their partners regarding their sexual pleasures (82%). This not only justifies their cheating behaviour, but also confirms women’s need and desire for a happy sex life, – which is exactly what men want, too. So why are women discriminated for such a common thing between both genders?

François Kraus, Director of Gender, Sexuality and Sexual Health at IFOP, who conducted the study, explains: “Because social stigma around female infidelity is a big issue in the UK, more women find themselves “sexually faithful. This shows that the UK still has a very traditional view of infidelity.”

Despite the advancing awareness of gender inequalities, in fact, the cultural myth of an inherently monogamous woman still persists, labelling female infidelity as an improper and unethical practice, making women uncomfortable, ashamed and even judgmental against themselves when it’s about adultery.