Muscles or “dad bods”: what do married women prefer for a brief encounter?

This summer, everyone’s talking about it and women agree massively: it’s dad bods every time, these men in their forties who have an athletic figure but also a touch of cuddle factor; just right. Bodies that are neither excessively muscular nor completely gone to rack and ruin. The phenomenon is not new, certainly, but in recent months it has taken on a far more wide reaching aspect. Now, there are countless examples of celebrities who have joined the club, like Leonardo DiCaprio or Ben Affleck. Gleeden, the extramarital dating site with 2.6 million members, interviewed married women to learn a little more about this surprising trend: for choice, what they prefer for an extra-marital fling? Muscular bodies or dad bods? They are more than 5,600 who responded and the results are pretty amazing!

Dad bods; Is that what women really want?

Easy for the male, to go with this trend, which finally gives them THE best excuse to let go a little. Here they are, happy to free themselves from the terrible weekly jog!
Especially when you consider that, according to the Gleeden survey, the majority of married women prefer to have an affair with a dad bod’ rather than a man with bulging muscles. Surprising? Not really, according to all the good reasons they give us.

At Gleeden, the majority of women surveyed seems to appreciate the ded bod’ for what he represents, rather than for his body per se.
Indeed, almost two thirds of them prefer them to the muscular men because they believe that they know how to make the most of small pleasures (58%). With them, they can enjoy a good dinner, a good wine and an evening on the couch without feeling guilty.

Half of respondents (48%) also suggest a happier and more relaxed attitude.
Oh yes, dad bods’ are cool. They are jovial, they cultivate good humour and do not bother with small everyday worries. Moreover, many women consider them to be better lovers. In bed, they would be relaxed and encourage their partner to be as well, an essential criterion for lengthy legs in the air sessions!

However, some women also appreciate such men of this type, as they as it helps them to cast a kinder eye on themselves. Indeed, over a third of women (39%) would choose a man with a a touch of cuddle to feel better about themselves, less jusged for their body, allowing them to flourish in an equal relationship.

21% of respondents also think that these men are less self-centered and obsessed with their body: exit the high-protein diets, married women want an uninhibited lover, who appreciates life and its little excesses without angst. With them at least they know that Ben and Jerry’s pot can be passed around with a smile to boot!

Finally, 9% of women say they feel more beautiful and less overshadowed by the other’s physique with cuddlier men. They simply come across as more human, more natural and therefore more attractive.

So when will the “mom body” trend take off? 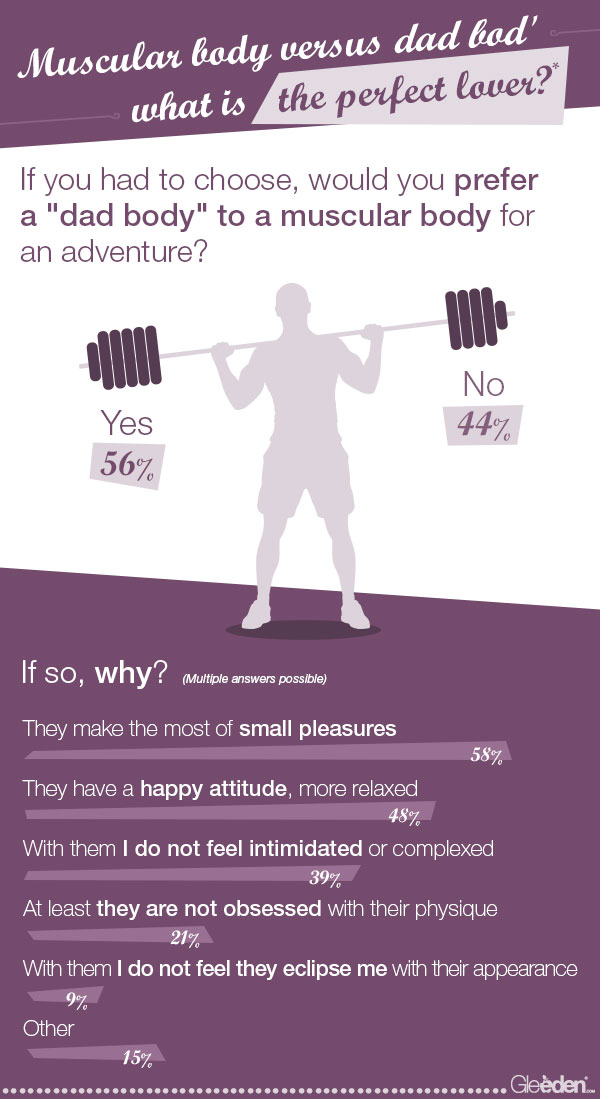