The need to escape the daily routine and to seek sexual fulfilment is felt by all social classes, all age-groups, and both genders. But when it comes to yielding to temptation and tasting the forbidden fruit, do personal predispositions play a significant role? Even more interestingly, is there an infidelity “gene”? Is infidelity hereditary? This is the question that Gleeden, a well-known platform for extra-marital encounters, attempted to understand. In a very serious study coupled with an internal investigation of their site members, they managed to uncover some of the answers.

A study at Queensland University in Australia recently showed that 63% of unfaithful men and 40% unfaithful women owe their infidelity to their genetic heritage. The study also allowed the researchers to identify a specific gene in women that could be responsible for this infidelity. Known as AVPRIA, it produces a hormone called arginine vasopressin, which affects social behaviour and attachment between sexual partners.

Can we blame our indiscretions on our parents?

Individual willpower may therefore not always be at fault in cases of infidelity. To find out for sure, Gleeden.com enlisted the help of its members, asking them whether their parents were ever unfaithful. Of course, it is not always easy to recognise unfaithfulness that is close to home, but the results are nonetheless convincing.

Out of over 10,000 participating members*, including both men and women, 46% of them said that they were aware of at least one instance of infidelity committed by one of their parents. Many of the people who find sexual fulfilment both within and without their couple would find the scale of this result surprising. So, is this a case of children emulating their parents? Genetic inheritance? Emotional inheritance? Or simply coincidence?.

But public opinion on this topic is still punishing, and women in particular are quick to be condemned if they stray… Some may welcome the slightly easy excuse provided by genetics, but the majority do not need an excuse to reflect upon their own pleasure and satisfy their need for complicity and intimacy“. 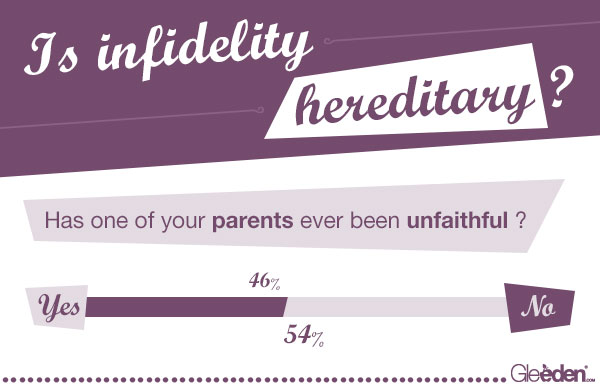