In 2014, the results of a study conducted by the sociologist Christin Munsch showed that men financially dependent on their partner were more likely to have an extramarital relationship than others. But it also showed that when the man contributes more than 70% of household income, there is also more risk of him being unfaithful. To explore this complex subject further, Gleeden, the leader in extramarital encounters decided to conduct its own investigation. Are rich men more unfaithful?

By analyzing the income of more than 6000 male members of the site who reported having been unfaithful in the past year, Gleeden tried to establish a link between income and infidelity and explain the reasons.

Among the members surveyed, a majority claims to have an income over 4000 pounds per month. These results corroborate many misconceptions about money and infidelity. Most of them (88%) also believe also there is a real link between their income and their infidelities.

In particular some members consider infidelity as an escape mechanism, a way to spice up daily routine faced with very demanding work (32%). Almost a quarter of them (22%) believe that their frequent trips are the main reason for their little pranks. Others say it hard to resist numerous solicitations from women who are undoubtedly more attracted to a man with a stable situation. 18% feel things this way. Finally, some men have had their confidence boosted by a good job and large income. 16% say this is the cause of their infidelity.

Finally, only 12% of men surveyed establish no direct link between their income and infidelity. Yes, whoever says high income, says job with lots of responsibility, variable use of time and numerous trips away from home. Many criteria that make infidelity easier, because it is more discreet. Finally, one might think that men who earn most of the household income feel less endangered by a break in the event of misconduct.

Solene Paillet, head of Gleeden.com communication, responds to this survey:
“This study suggests there may be a genuine link between a person’s income and their infidelity. Gleeden seems to be a way for men to escape from a heavy daily routine and accord themselves a few moments of passion out of time. We should also note that 67% of connections to our site are made from the workplace; so unfaithful people must be working hard!“.

But we should not forget that infidelity is a matter of desire before being a matter of salary. Nope, no need to apologize to satisfy your desires! 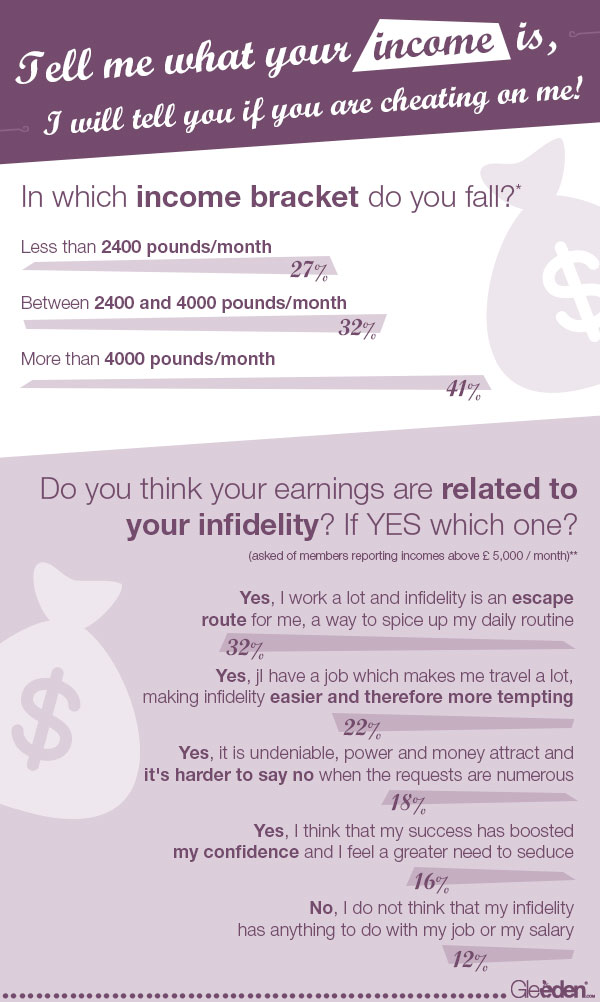